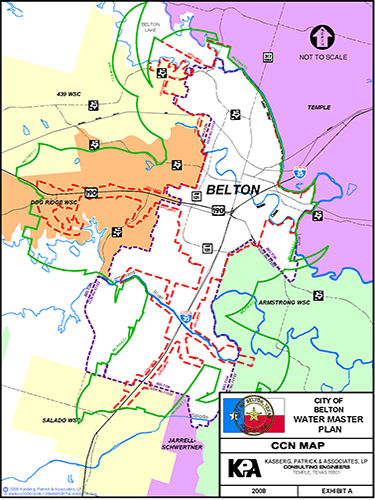 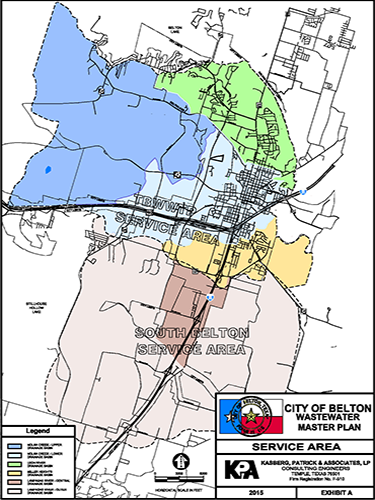 Project Description: The Water and Wastewater Master Plan is ongoing and will provide a comprehensive evaluation and analysis of the City of Belton’s current utilities and infrastructure improvements required to sustain future growth through a 50-year planning horizon. The purpose of these comprehensive Plans is to provide proactive management to ensure a vibrant, vital, and orderly development for the long-term success of the City of Belton.

The Plan will include a detailed discussion on pressure planes, treatment, consumption, pumping, and storage in the water system. Also included in the Plan is a detailed analysis of pump stations, storage tanks, lift stations, and pipelines. A Phasing Plan and Opinions on Probable Costs for the necessary improvements, along with documentation of the City’s existing utility-related contracts, current extension policies, a summary of governing agencies related to municipal utilities and projects, and a synopsis of project delivery components are also provided in the final Plan.

KPA prepared and distributed infrastructure inventory forms to collect the necessary data to achieve the final plans. Work Sessions with City Staff were conducted by category as indicated and reviewed to discuss critical points contained in the inventories. KPA is evaluating the City’s existing Water System and will prioritize improvements to serve the projected population. A hydraulic analysis will be performed utilizing the information exported from the City’s GIS and modeled in the GEMS software for compatibility with the City’s GIS platform. This model will include the existing system and proposed steady-state and extended-period simulation improvements. The Master Plans include exhibits illustrating historical and projected demands, a schematic of the system, CCN boundaries, land use, existing and proposed pressure planes, and proposed improvements.

Scope of Services: Tasks include assisting the City in defining its planning area based on CCNs, Future Land Use, Probable Development patterns, Topographic Constraints, and Preliminary Understanding of System Limitations. In addition, KPA will perform Calculations of Inflow and Infiltration Volumes and determine Future Land Use areas by Sub-Basin, Hydraulic Analysis, and the development of a working Hydraulic Model for collection systems. Followed by these tasks, KPA will present a Proposal of Future recommended Improvements, Opinions of Probable Costs, Comprehensive Reports, Figures, Schedules, and Exhibits.