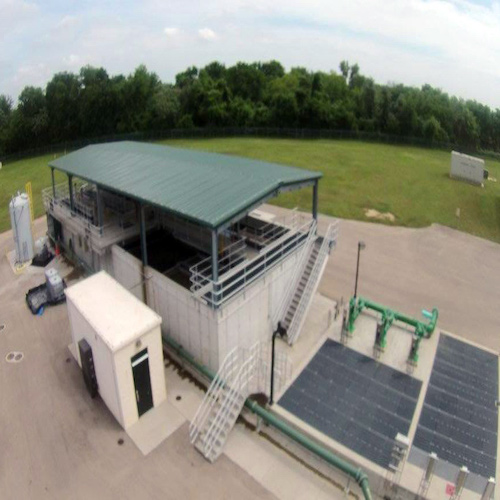 Project Description: The City of Temple Membrane Water Treatment Plant was constructed in 2004 as a direct filtration membrane plant. During the first five years of operation, the City noted difficulties in cleaning the membranes and differences in the settleability of the backwash waste stream. KPA Engineers, with Carollo Engineers as a sub-consultant were tasked with investigating the source of the issues and recommending necessary improvements. A report recommending two separate construction projects was published in 2008. The report contained laboratory reports detailing the change in the source water from the Leon River and recommendations made in conjunction with the membrane manufacture (Pall) for a modified chemical clean process and enhanced sedimentation on the backwash waste stream.

The Chemical CIP modifications included the addition of two, larger neutralization tanks to maximize the number of racks that could be cleaned without hauling off waste, two chemical storage tanks and six peristaltic pumps with associated piping and instrumentation. Additional modifications consisted of the addition of Modicon I/O modules, programming the City’s PLC modules and making necessary configuration changes to the HMI database.

KPA Engineers was the prime engineer for the Study and both construction projects. KPA performed design services for the Chemical CIP project as well as the pump stations and ancillary facilities (all features except flocculation and settling) for the Backwash Sedimentation Improvements.

Scope of Services: KPA performed bidding, construction administration and on-site representative services for both construction projects. Additionally, KPA was the point of contact for all correspondence with TCEQ that allowed the installation and subsequent operation of the backwash facilities. A key component of both projects was the need to work closely with plant personnel to allow construction and start-up activities to proceed without impacting the City’s ability to successfully produce potable water.